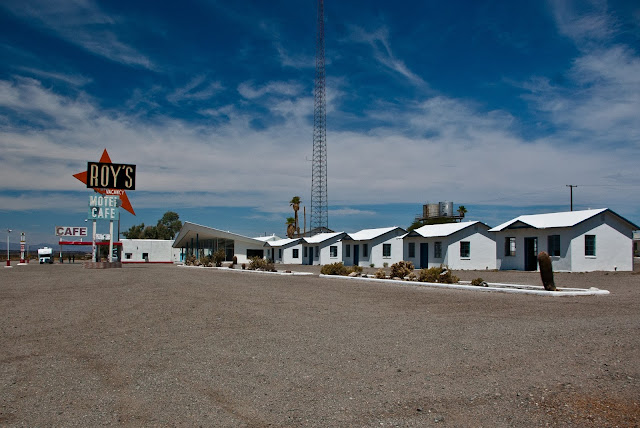 My second day on Route 66, and one I'd anticipated for quite a while. Today's driving promised forgotten roads, ghost towns, empty buildings and lots and lots of desert. But first, breakfast, corn beef hash over at the truck stop.

Fed, and ready to go, it's back to the open road. There's a short stretch of interstate before taking the turning to Goffs. There's not much left here - the ruins of a general store - but a line of mailboxes reminds me there's still life out in the desert.

This is one of the longest uninterrupted sections of old Route 66, following close to the Santa Fe railway. The interstate cuts straight across the desert, bypassing this whole loop and sounding the death knell for many small towns.

After Goffs, the road loops under US-40 and heads off to Amboy. There's not another vehicle between me and the horizon. Every mile or so a deserted gas station or store is all that's left of another small town. They're still marked on the maps - Fenner, Essex, Danby, Chambless, Cadiz - but little remains. When they bypassed this loop of Route in 1973, the traffic dried up, as did the businesses. Now all that's left is the occasional picturesque ruin, surrounded by rusted barbed wire. The once popular Cadiz summit gas station is now a graffitied ruin. 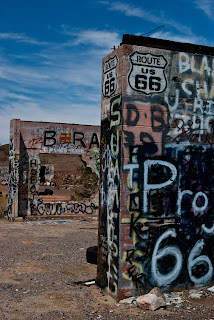 The road speeds down from Cadiz - the emptiness of the roads, the lack of roadside distractions, make it easy to go much too fast. I find my SUV bombing along at 100mph before I catch myself. Then, in the distance, I spy the sign of Roy's Motel and Cafe at Amboy. 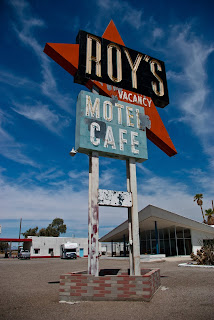 Roy's is about as iconic as it gets. Although the town of Amboy has long since sunk into ruin, the modernist motel, with its flying V roof and towering neon sign remain. Its use in many pop videos and fashion shoots gives it an air of familiarity. At the time of writing (2012), the motel hasn't reopened and cafe is pretty much for show. I bought an iced coffee and a bag of cookies before taking many, many photos.

The site was pretty much deserted, except for me and a young Dutch couple. This was a pattern I saw repeated across Route 66 - the number of Europeans and Asians travelling the road. Except for a stalwart group of enthusiasts, Americans seems happy to let Route 66 crumble. Yet something resonates with Europeans - because we live surrounded by our own history, we want to discover the history of this country too. Route 66 is a part of America's history.

Refreshed after Amboy, it's back on the road. More ruins - Bagdad, Siberia, Klondike and finally plucky Ludlow, where I stop for gas. Unlike the other towns I've passed Ludlow won't give in without a fight. Like all the others, it was once a railstop - but when the trains no longer stopped, it moved first to be closer to Route 66, and then again to be closer to US-40. There's not much here - a gas station and a motel (that I plan to visit this year - watch this space). But it's not a ghost town. Not yet.

After the loop, US-40 looms into view again, but I'm not rejoining the interstate. Route 66 runs parallel all the way to Barstow - sometimes no more than a few feet away, sometimes in the distance. Often I find myself travelling faster than the cars on the interstate. 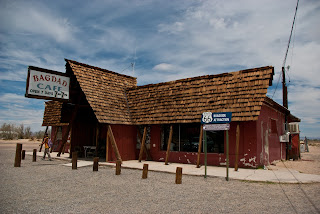 Before Newberry Springs, there's the famous Bagdad Cafe. Now, I haven't watched the movie, but it still trades on its appearance in the eponymous 1987 movie. This isn't the original Bagdad cafe, that's long gone, a few miles back on the loop, a single tree marking the spot. They used the Sidewinder cafe in Newberry Springs, still hanging on because of its proximity to the interstate. Sadly the attached motel is now a ruin. 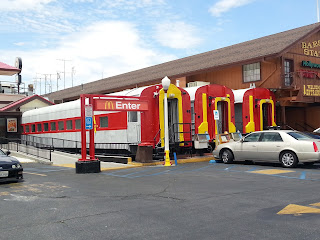 From here it was a short drive to Barstow, and lunch at ... McDonalds! Now, this is no ordinary McDs, as it's built from three converted train cars. It's the most unique McDs I've been to - but alas, the food was the same as everywhere else. A surprising discovery is that the food in British branches of American chains is actually better than the originals. 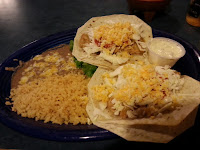 After lunch, I take a drive through downtown Barstow - but nothing must have piqued my interest enough to stop and take a photo. My email home says:

I've recently arrived in Barstow, where I had a delicious dinner in the local McDonalds. No, I lie, it was horrible and I didn't finish it, but points for a great building. There's not a lot to do in Barstow - it's got a long strip with some interesting 60s motels on it, and lots of fast food chains. But there's almost no shops - all shopping has moved to a big out of down mall - so the centre feels a bit dead and deserted. I did find the wonderful Treasure Mall - think a vast charity shop, but run on a commercial basis. People just rent tables to sell their unwanted stuff. Don't worry, I didn't buy anything. 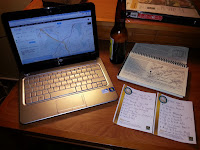 Then it was off to the 'Quality Inn On Historic Route 66', a charming motel set around a lush green courtyard. My trip through downtown hadn't inspired me to eat locally, so instead I tried the on-site Mexican. It was surprisingly good - if a uniform shade of brown - and then back to the room to watch a movie and plan the next day - the drive to L.A! 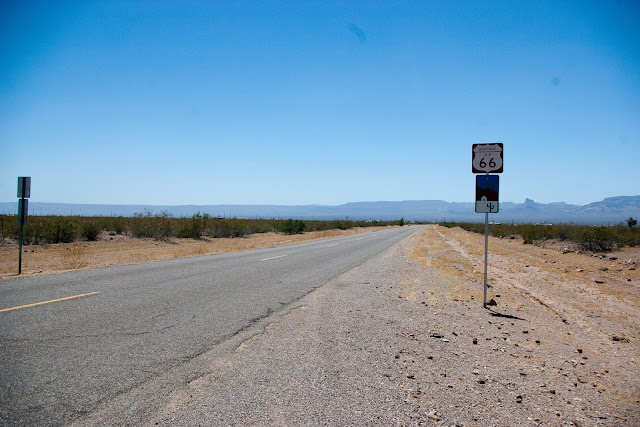